The Making of MCR

From the beginning, MCR Labs has prioritized patient & consumer health.

"It started off as just trying to fill a need," - Michael Kahn, President & Founder of MCR Labs

When voters first decided to legalize medicinal cannabis back in 2012, patients were hopeful this would be a turning point for them. Finally, they would no longer be considered criminals by the state for using a plant to treat conditions like cancer, glaucoma, and PTSD.

However, granting patients the right to use cannabis is one thing. Actually providing access to safe products is another. Unfortunately for Massachusetts residents, it would be another three years before Massachusetts finalized regulations for testing cannabis and even longer before dispensaries who had the resources and capital to comply with new regulations would come online.

The need for access to safe product was obvious and is what ultimately pushed Michael Kahn, President and Founder of MCR Labs, to take the plunge into the cannabis testing industry.

“It started off as just trying to fill a need,” Kahn said. “The whole program started with doctors making recommendations to patients without a system for safe access. There was just so much need out there and we were really just trying to help.”

With patient health and safety as his objective, Kahn set out to establish a lab that could satisfy that need for quality testing. After incorporating the lab, the next step was to approach Scott Churchill, a former colleague of his from his years working as a chemist, to see if he would serve as MCR’s lead scientist.

At the time, Churchill had never even heard of medical cannabis. After taking some time to research the subject and the industry, however, Churchill decided to take the leap. “I saw a lot of opportunity to bring good science to this field,” he said.

They started off attending as many cannabis-centered events possible, especially the Department of Public Health’s meetings. At the time, the DPH had been charged with overseeing the medical cannabis program and was in the midst of setting regulations surrounding product testing.

Having previously worked in pharmaceutical contract research, Kahn said he knew from experience that third party testing is often the most efficient and cost-effective way to screen products.

“It was pretty obvious to me at the time that it should at least be allowed because it could turn a large, fixed cost into a smaller, variable cost. It would be much more efficient than to require a testing laboratory at every grow site,” he said. The DPH agreed with Kahn, and wound up requiring third-party testing for all cannabis products.

Kahn spent a lot of time back then at DPH meetings, and others like it, advocating for patient rights and product safety. At the same time, he and Churchill traveled from town to town in search of a community that would allow them to open a cannabis testing lab.

And then, after months of hearing the word ‘no,’ they finally got a yes.

Framingham, the state’s largest town that would eventually become a city, said yes. Kahn and Churchill, along with Kahn’s brother Yasha, moved into a small office on Tripp Street, where they would remain for the next three years. They fished an old High-Performance Liquid Chromatography machine out a friend’s basement and spent days cleaning and refurbishing it. 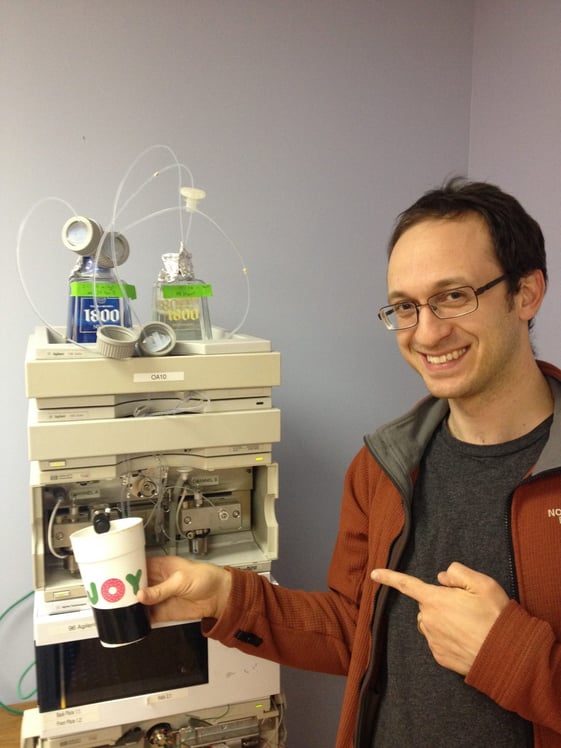 Within two weeks, they had a method to test for cannabinoids up and running. Demand for testing was high, and they worked through Thanksgiving to get the method ready for anxious patients and caregivers.

“It’s crazy to me that we did it that fast,” Kahn said. “ In pharma it would take at least two weeks to develop one molecule. And here we were trying to do all six.”
Back then, there were only six cannabinoid standards available for MCR to use for testing. Since then, the company has expanded its cannabinoid screen scope to 17 (and counting), as more standards became available.

For the most part, business proceeded at a rapid but steady pace. In January 2014, the following year, the lab had its first ISO audit and was accredited for their cannabinoid method. In 2015, as the DPH released draft regulations on testing, the lab developed methods for heavy metals, microbiological contaminants, pesticides, and residual solvents. They also hired their first few official employees and moved to a larger basement office on Speen Street in Framingham.

All the time spent at community events and government meetings paid off for Kahn and company. Clients flowed in, almost always after hearing a personal recommendation from another client.

“A lot of it was word of mouth,” Kahn said. “It took time to develop and build trust with the community. But our goal has always been public health through accurate testing. As long as we stuck to that people came.”

The landscape of the Massachusetts cannabis industry has changed significantly since then, however. After the state legalized recreational cannabis in 2016 and the first adult-use shop opened up in 2018, business surged. What was a company of about 10 in 2016 quickly grew into a company of over 50 employees. MCR Labs is constantly hiring laboratory staff to keep up with the testing demand as new dispensaries come online.

But even as the lab’s focus has shifted toward dispensary testing, the number one mission is still consumer health and safety.

“Our focus is still on public health. Today, we have to work on that goal through collaboration with the producers. They’re a critical part of it now,” Kahn said. “We achieve public health through accurately reporting our data to them, as well as to patients.”

What’s In Your Weed?